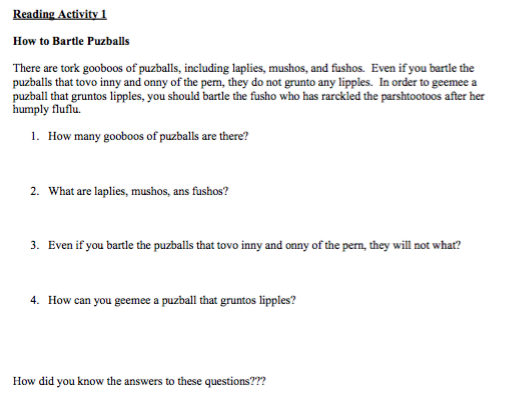 Questions define tasks, express problems, and delineate issues.  Answers, on the other hand, often signal a complete stop in thought.  Only when an answer generates a further question does thought continue its life as such.

This is why it is true that only students who have questions are really thinking and learning.  It is possible to give students an examination on any subject by just asking them to list all the questions that they have about a subject, including all questions generated by their first set of questions.

I’m going to try this on Monday.  We’ve been studying the government of the United States, have set up a three-branch government in the classroom.  The congress and senate passed a law that we could have a class pet which was signed by the president.  Monday I, a concerned citizen, am going to challenge this law in the Supreme Court stating in my brief that this law violates the Constitution as one of the precepts of our Constitution is “Respect others.”  The students know I don’t want a class pet, but if I lose my case we’ll have one (although I’m not going to buy it or care for it).  After this, I’m going to give them an exam consisting only of them writing down their questions about government.  I’ll let you know how it goes.